The Craft: How the Freemasons Made the Modern World (Hardcover) 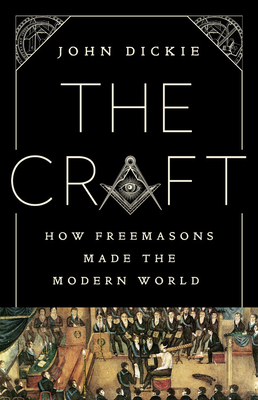 By John Dickie
$32.00
On our shelves now (while supplies last)

Insiders call it the Craft. Discover the fascinating true story of one of the most influential and misunderstood secret brotherhoods in modern society.
Founded in London in 1717 as a way of binding men in fellowship, Freemasonry proved so addictive that within two decades it had spread across the globe. Masonic influence became pervasive. Under George Washington, the Craft became a creed for the new American nation. Masonic networks held the British empire together. Under Napoleon, the Craft became a tool of authoritarianism and then a cover for revolutionary conspiracy. Both the Mormon Church and the Sicilian mafia owe their origins to Freemasonry.
Yet the Masons were as feared as they were influential. In the eyes of the Catholic Church, Freemasonry has always been a den of devil-worshippers. For Hitler, Mussolini and Franco, the Lodges spread the diseases of pacifism, socialism and Jewish influence, so had to be crushed.
Freemasonry's story yokes together Winston Churchill and Walt Disney; Wolfgang Mozart and Shaquille O'Neal; Benjamin Franklin and Buzz Aldrin; Rudyard Kipling and 'Buffalo Bill' Cody; Duke Ellington and the Duke of Wellington.
John Dickie's The Craft is an enthralling exploration of a the world's most famous and misunderstood secret brotherhood, a movement that not only helped to forge modern society, but has substantial contemporary influence, with 400,000 members in Britain, over a million in the USA, and around six million across the world.

John Dickie is Professor of Italian Studies at University College, London. His book, Cosa Nostra: A History of the Sicilian Mafia, is an international bestseller, with over 20 translations, and won the CWA Dagger Award for non-fiction. Since then he has published Delizia! The Epic History of the Italians and their Food (2007) -- now a six-part TV series for History Channel Italia and other networks worldwide. In 2005 the President of the Italian Republic appointed him a Commendatore dell'Ordine della Stella della Solidarietà Italiana. He lives in London.

"A fascinating tale...Mr Dickie has turned legend into history."
—The Economist

"The Craft is a superb book that often reads like an adventure novel. It's informative, fascinating and often very funny."—The Times (UK)

"The Craft is a shadow history of modernity. Though more sober than most lodge meetings, it is, like its subject, ingenious and frequently bizarre... The Craft is well-crafted and sensible, making good use of English archives which have only recently been opened."
— Spectator

"[John Dickie] takes on this sensational subject with a wry turn of phrase and the cool judgment of a fine historian... I enjoyed this book enormously. Dickie's gaze is both wide and penetrating. He makes a persuasive case for masonry's historic importance."—Dominic Sandbrook, Sunday Times