The Age of Anxiety: A Novel (CD-Audio) 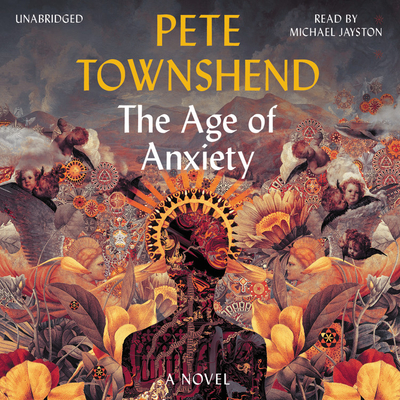 By Pete Townshend, Michael Jayston (Read by)
$30.00
Not in stock at store. Will, in most instances, ship from our warehouse in 7-10 days

In his debut novel, rock legend Pete Townshend explores the anxiety of modern life and madness in a story that stretches across two generations of a London family, their lovers, collaborators, and friends.
A former rock star disappears on the Cumberland moors. When his wife finds him, she discovers he has become a hermit and a painter of apocalyptic visions.
An art dealer has drug-induced visions of demonic faces swirling in a bedstead and soon his wife disappears, nowhere to be found.
A beautiful Irish girl who has stabbed her father to death is determined to seduce her best friend's husband.
A young composer begins to experience aural hallucinations, expressions of the fear and anxiety of the people of London. He constructs a maze in his back garden.
Driven by passion and musical ambition, events spiral out of control -- good drugs and bad drugs, loves lost and found, families broken apart and reunited. Conceived jointly as an opera, The Age of Anxiety deals with mythic and operatic themes. Hallucinations and soundscapes haunt this novel in an extended meditation on manic genius and the dark art of creativity.

Pete Townshend is the lead guitarist and principal songwriter of The Who -- one of the most influential rock bands of the 20th century, selling over 100 million records worldwide -- and the composer of the rock operas Tommy and Quadrophenia.

"A cracking story about sex and drugs and rock 'n' roll."—Mail on Sunday EVENT


"Setting his novel in the milieu he knows in all its excess, Townshend directs a cast of memorable characters while examining themes of creativity, genius, music, and love."—Daily Mail


"The scope of The Age of Anxiety is broader than first appears: this modern-day fable dwells on creativity and madness."—Radio Times