A Gift Certificate can be the perfect solution.
Available in many denominations, $10 and up. 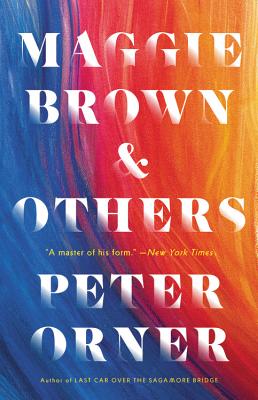 - A New York Times Notable Book
- A Chicago Tribune Notable Book
- An Oprah Magazine Best Book of 2019
- Kirkus Reviews Best Short Fiction of 2019
- Longlisted for the Simpson/Joyce Carol Oates Prize
In this powerful and virtuosic collection of interlocking stories, each one "a marvel of concision and compassion" (Washington Post), Peter Orner, a National Book Critics Circle Award finalist and "master of his form" (New York Times), takes the short story to new heights.
Through forty-four compressed gems, Peter Orner, a writer who "doesn't simply bring his characters to life, he gives them souls" (NYT Book Review), chronicles people whose lives are at inflection points, gripping us with a series of defining moments.
Whether it's a first date that turns into a late-night road trip to a séance in an abandoned airplane hangar, or a family's memories of the painful mystery surrounding a forgotten uncle's demise, Orner reveals how our fleeting decisions between kindness and abandonment chase us across time. These stories are anchored by a poignant novella that delivers not only the joys and travails of a forty-year marriage, but an entire era in a working-class New England city. Bristling with the crackling energy of life itself, Maggie Brown & Others marks the most sustained achievement to date for "a master of his form" (New York Times).

Peter Orner, a two-time recipient of the Pushcart Prize, is the author of five previous books, including the novel Love and Shame and Love and the collection Esther Stories, a finalist for the PEN/Hemingway Award. His memoir Am I Alone Here? was a finalist for the National Book Critics Circle Award. His fiction has appeared in The Atlantic, The Paris Review, Tin House, and Granta, and has been anthologized in The Best American Short Stories. The recipient of the Rome Prize, a Guggenheim Fellowship, and a Fullbright to Namibia, Orner holds the Darmouth Professorship of English and Creative Writing at Dartmouth College.

"I'm getting a poignant shiver from the novella 'Walt Kaplan Is Broke,' which closes Peter Orner's terrific new story collection, Maggie Brown and Others, and features a coronary patient taking stock of his long, mostly happy marriage...There's a lot of affection in that story, and in all of Orner's characteristically generous work...In this collection of forty-four compressed stories, and one novella, about blue-collar men and women and lives that didn't quite pan out, Orner maintains his reputation as a master of the form."—Gregory Cowles, New York Times Book Review, Ten New Books We Recommend This Week

"It's been apparent since his first book, "Esther Stories" (2001), that Peter Orner was a major talent...His exacting prose casts an elegiac and autumnal glow...You know from the second you pick him up that he's the real deal. His sentences are lit from below, like a swimming pool, with a kind of resonant yearning that's impossible to fake...He has that gift (Keats saw it in Shakespeare) of "negative capability"--in part that passive yet electric ability to submerge himself in the thoughts and emotions of a wide range of humans...Orner can do anything."—Dwight Garner, New York Times

"There's a beautiful drifting quality to Maggie Brown and Others, a sense of being invited inside a roving, kaleidoscopic mind--reluctant to generalize, tender, astute, with an eye for both comedy and heartache--and adopting its rhythms as your own...'Lighted Windows' is the title of the collection's second section, but the phrase might apply to the whole book. Peter Orner is a wonderful guide, training our gaze from window to window, where we find reflections of ourselves even as we glimpse the inscrutable, captivating lives on the other side of the glass."—Elizabeth Graver, New York Times Book Review

"There are forty-four stories in this collection, and they are all marvels of concision and compassion. Pick it up. Trust me."—Bethanne Patrick, Washington Post

"Orner writes words that don't disappear . . . At the same time, these
stories never seem confined to the pages on which they appear. Though set in
different eras, going back to the '60s, as well as in different time zones,
they float over and under each other, their recurring characters cutting across
time and space . . . Maggie Brown & Others is so full of brilliant,
reverberant lines--and cuttingly funny ones as well--that they are like critics'
popcorn: You can't stop citing them . . . Writing doesn't get any better."—Lloyd Sachs, Chicago Tribune

"Orner writes with a combination of sincerity and self-awareness. He takes a subtle tone of empathy toward his characters' ambitions by acknowledging how simultaneously unremarkable and wrenching their lives feel...the book is in its totality most vividly reminiscent of Raymond Carver."—Antonia Hitchens, San Francisco Chronicle

"A master of flash fiction tosses Chekhov and Carver into a blender, adds a dash of Catskills wit, and serves up an effervescent cocktail conjuring sunset beach strolls and marriages on the rocks."—O, The Oprah Magazine, 10 July Books You Won't Be Able to Put Down

"If you're going to pick up one short-story collection this summer, might we suggest Maggie Brown?"—Entertainment Weekly

"Orner is a master of the aphoristic short story. The forty-four concise and stinging tales in Maggie Brown & Others express a full spectrum of caustic observations, nuanced emotions, and life-warping predicaments...Orner writes with a heady blend of gravitas and wit similar to that of such kindred short-story virtuosos as Deborah Eisenberg, Andre Dubus, and Gina Berriault, while expressing his own edgy empathy and embrace of everyday absurdity."—Donna Seaman, Booklist (starred review)

"Orner has a sharp eye for absurdity and a discerning ear for dialogue...Insightful, rueful, and often humorous, this collection holds a mirror to contemporary life and gives the reader much to reflect on."—Kirkus Reviews (starred review)

"Orner is secretly one of the best contemporary writers working today: his characters are indelible, his focus small and piercing, his insights moving...all with his special sense for truth, character, and wistful realism."—Literary Hub

Peter Orner has the unique ability to invent fully-formed, vibrant characters within the shortest of stories...Orner's characters are unapologetic and complex, holding guilt, fear, and love...Orner presents the character's entire inner world--and it's all don in just a few pages...he builds these stories carefully--full of nuance and a special kind of lightness--and hands them to us on an assorted platter"—Jeevika Verma, Ploughshares

"The stories in Peter Orner's Maggie Brown & Others feel eternally human, less like they've been written and rather like they've been drawn by patient hands from an ancient aquifer of memory, longing, and soulful knowing."—Adam Johnson, author of Pulitzer Prize winner The Orphan Master's Son and National Book Award winner Fortune Smiles

"It's unusual for a writer of such great detail and originality to still have so much heart on his sleeve. I didn't realize how I'd missed actual feeling in our celebrated younger writers until I fell onto Peter Orner and these sublime new stories. I may not go back."—Thomas McGuane, author of Gallatin Canyon

"Peter Orner is an extraordinary writer, and Maggie Brown & Others was a deep pleasure to read. His stories teem with life and energy, and unfold with a kind of soulful grace he has made all his own."—Adam Haslett, two-time Pulitzer Prize finalist and author of Imagine Me Gone

"No one captures the inner lives of vanished places and people like Peter Orner. Radiant, funny, full of wisdom and heart, his vibrant portraits pulse with authentic energy and are as perfectly tuned to his characters' idiosyncratic speech as those of Grace Paley."—Andrea Barrett, National Book Award-winning author of Ship Fever and The Air We Breathe

"To read Peter Orner's stories is to live simultaneously in so many lives: the reader's memories intertwine with the characters', the characters' dreams resurface in the reader's. People we have loved and lost, people we have encountered and missed -- they wait for us to rediscover them in Orner's stories. This book, exquisitely written, is as necessary and expansive as life."—Yiyun Li, author of Where Reasons End and A Thousand Years of Good Prayers