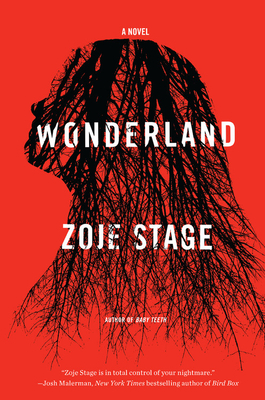 By Zoje Stage
$28.00
On our shelves now (while supplies last)

One mother's love may be all that stands between her family, an enigmatic presence--and madness.

After years of city life, Orla and Shaw Bennett are ready for the quiet of New York's Adirondack mountains--or at least, they think they are. Settling into the perfect farmhouse with their two children, they are both charmed and unsettled by the expanse of their land, the privacy of their individual bedrooms, and the isolation of life a mile from any neighbor.

But none of the Bennetts could expect what lies waiting in the woods, where secrets run dark and deep. When something begins to call to the family-from under the earth, beneath the trees, and within their minds-Orla realizes she might be the only one who can save them . . . if she can find out what this force wants before it's too late.

With an ending inescapable and deeply satisfying, Wonderland brilliantly blends horror and suspense to probe the boundaries of family, loyalty, love, and the natural world.

Zoje Stage is the USA Today and internationally bestselling author of Baby Teeth. A former filmmaker with a penchant for the dark and suspenseful, she lives in Pittsburgh..

“If art imitates life, horror fiction is a great mimic, predicting and exploring the frightening and surreal realities of the contemporary world. Exhibit A: Zoje Stage’s mind-bending, trippy second novel, Wonderland.  . . . The question of responsibility for the nightmare lingers as does the line between reality and imagination."
—Danielle Trussoni, New York Times Book Review

"A beautifully choreographed and astonishing second novel from the author of the much-celebrated Baby Teeth . . . Eloquent and unflinching."—Booklist (starred review)

"Oh, fright fans rejoice. That sure hand you're looking for? That relentless climb, that crescendo of cold sweat? It's all here. Deep in the woods, under a lot of snow, steeped in mad, unfamiliar nature. Zoje Stage is in total control of your nightmare. For those who live to be scared, Wonderland is the book you'll be glad you cracked open at home, alone, at night."—Josh Malerman, New York Times bestselling author of Bird Box and Malorie

“Sublimely suspenseful . . . Stage is a literary horror writer on the rise. Her refined prose and knack for emphasizing small but disquieting details make Wonderland a standout summer suspense selection. Reader be warned: The woods will never look the same once you read Stage’s latest.”
—BookPage

"A novel that's sure to leave you sleeping with the lights on."
—PopSugar

"The tension builds steadily throughout . . . Reminiscent of the severe disorientation and trauma in Mark Z. Danielewski's House of Leaves and the nature-seeking revenge theme of Stephen Graham Jones's The Only Good Indians."—Library Journal (starred review)

“Stage knows how to set a scene, ramp up the suspense and make you feel so trapped in it that the horror becomes palpable [and] undeniably creepy… This is a book about wish fulfillment, fear and faith.”
—BookReporter

"Wonderland shows the terror lurking below the surface of domestic bliss, when we realize our familiar and cozy world may not be as it seems. Zoje Stage is one of the few writers who can make the supernatural feel totally, dangerously real."—Alma Katsu, author of The Deep and The Hunger

"Zoje Stage has a knack for unsettling atmospherics . . . Wonderland is a perfect, chilling parable for summer."
—CrimeReads

"Wonderland is part ghost story, part family drama, part psychological thriller. And beyond that, it is beautifully written. I was captivated through the entire story."—T. Greenwood, author of Keeping Lucy and Rust & Stardust

“Masterfully depicts an unknown force that embodies the oppressive tension that can come with being trapped with one's family, cut off from the rest of society. . . . Eerily timely, but Orla has much worse demons to face than the ones inside the mind. This story of domestic challenges and mounting horror will please fans of Shirley Jackson."
—Shelf Awareness

"Five words: Don't go into the woods. Thanks to this book, now I'm afraid of trees, psychotic children, magic, ghost stories, families, polar bears, shotguns, and my own shadow. #thankszoje Wonderfully dark and creepy, Wonderland is a terrifically terrifying masterpiece. Horrific. Exquisite. Haunting. Magical. Stage is a masterful voice in horror."—Rea Frey, author of Not Her Daughter and Until I Find You

“Expect supernatural events and at least one 'ruthless' surprise . . . Readers of Wonderland will be shocked.”
—Pittsburgh City Paper

"What
a stunning sophomore book! Stage masterfully takes the reader through this
chilling tale, hitting you hard in the gut as the dread and tension rises ever
higher. I was nauseous, fearful, and loved every minute of it."

"Zoje Stage's Wonderland is a mesmerizing journey into the darkest realms of the supernatural; a family, escaping the perils of city life, discovers that the splendors of nature can mask a hidden face of savage, unnameable terror."—Kathleen Kent, author of The Burn

"Zoje Stage's foreboding sophomore novel combines the bone-chilling paranoia of The Shining with the uncanny suspense of Suspiria. Just as deliciously unsettling as her unforgettable debut, Wonderland is a must-read for horror and thriller fans."—Layne Fargo, author of Temper

"Zoje Stage plucks the strings of a mother's worst fears like none other through this wondrous adventure as it unravels into claustrophobic terror. Hauntingly beautiful and scary as hell, Wonderland takes you deep into the woods of one woman's mind and her harrowing struggle to save her children."—D.M. Pulley, author of The Dead Key and No One's Home