Last One Out Shut Off the Lights (Hardcover) 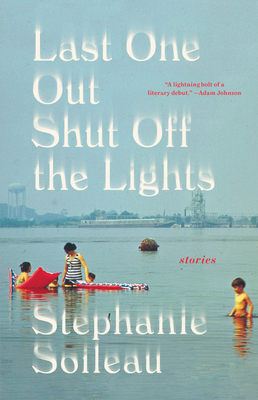 By Stephanie Soileau
$26.00
On our shelves now (while supplies last)

"A lightning bolt of a literary debut." ---Adam Johnson, Pulitzer Prize winner
"Enchanting and so neatly planed they feel made by time, these stories mark the debut of a writer to watch." ---John Freeman, Literary Hub
Last One Out Shut Off the Lights is an evocative portrait of the last-chance towns of southwest Louisiana, where oil development, industrial pollution, dying wetlands, and the ever-present threat of devastating hurricanes have eroded their inhabitants' sense of home. These eleven piercing stories feature indelible characters struggling to find a foothold in a world that is forever washing out from under them, people who must reckon with their ambivalence about belonging to a place so continually in flux.
In a collection whose resonant echoes abound, we meet a reluctant teenage mother who stows her baby in a closet to steal a night out; a spiteful retiree who sabotages his neighbor in the wake of a hurricane; a Pentecostal singer in a children's theater company who confronts the cultish leader of her troupe; a community of elderly Cajuns who conspire with a family of Sudanese immigrants to hide an escaped cow from the authorities; and a desperate young woman who tries to drag her brother to Mexico for surgery, determined to save his life and her own.
As Lauren Groff did for the state of Florida in her recent collection Florida, Stephanie Soileau demonstrates that Louisiana is as much a state of mind as it is a place on the map. A love letter to the Cajun language, life rhythms, and customs that still make the region unique, Last One Out Shut Off the Lights is also a powerful reminder of the treacherous escape routes that bedevil anyone longing to leave home, and the traps that remain for those who desire to return.

Stephanie Soileau's fiction has appeared in Tin House, Oxford American, and Glimmer Train, among other magazines, and has been reprinted numerous times in New Stories from the South. She holds an MFA from the Iowa Writers' Workshop and has been a Stegner Fellow at Stanford as well as an NEA and Provincetown Fellow. Originally from Lake Charles, Louisiana, Soileau now lives in Chicago and teaches at the University of Chicago.

"The stories in Last One Out Shut Off the Lights are stark and unflinching, though there is warmth and humor, too. The way bayous flow in both directions, these stories move from darkness to deep feeling and back again. There are also deeply sympathetic portraits of women who get left behind, hardscrabble ones and ones who were never allowed to believe so never really tried. Like a lovechild of Lucia Berlin and Walker Percy, this book is a lightning bolt of a literary debut, one that lights the sky, ignites fires, and changes all who behold it."—Adam Johnson, Pulitzer Prize winner for The Orphan Master's Son and National Book Award winner for Fortune Smiles

"Soileau debuts with this collection of stories about her home state of Louisiana. Following a series of characters who struggle to stay rooted in an area plagued by hurricanes, pollution and poverty, it aims to capture the region, distinguished by its Cajun influence, with complexity and nuance."
—Jennifer Day, Chicago Tribune

"Last One Out Shut Off the Lights is a knockout. Stephanie Soileau conjures southern Louisiana in all its unlikely specificity, the tank farms and check-cashing joints, the mobile-home dealerships and chemical plants. Her characters are as complicated and surprising as your most impossible relatives---maddening, ridiculous, heartbreaking, heroic. I loved this book."—Jennifer Haigh, New York Times bestselling author of The Condition

“Last One Out Shut Off the Lights is an evocative portrait of the last-chance towns of southwest Louisiana, where oil development, industrial pollution, dying wetlands, and the ever-present threat of devastating hurricanes have eroded their inhabitants’ sense of home. These eleven piercing stories feature indelible characters struggling to find a foothold in a world that is forever washing out from under them, people who must reckon with their ambivalence about belonging to a place so continually in flux.”
—Amy R. Martin, Southern Review of Books

“Soileau’s stories are distinct and imaginative... Her descriptions feel entirely fresh and relatable, inviting the reader to meditate on the dark forces of desire and futility that permeate our lives... Last One Out Shut Off the Lights is not just a tableau of hardship but also, perhaps, a love letter to Louisiana. Soileau’s characters cannot wait to escape, and yet they lean into the landscape’s familiar contours as a sort of comfort.”
—Krista Karlson, The Sierra Club

"A stunning debut from a writer to watch... Southwest Louisiana native Soileau portrays the beauty of her home state as well as the poverty, and her empathy and love for its people are evident."
—Booklist (starred review)

"These hilarious and heartbreaking stories follow outcasts of all stripes. What carries us through is Stephanie Soileau's remarkable voice---honest, bracing, and always emphatic---as she introduces us to these unforgettable characters and allows us to disappear a little into their lives. Last One Out Shut Off the Lights is a beautiful collection about the complication of home and the difficulty of belonging. I loved these stories."—Brit Bennett, New York Times bestselling author of The Mothers

"Enchanting and so neatly planed they feel made by time, these stories mark the debut of a writer to watch."
—John Freeman, Lit Hub, Most Anticipated Books of 2020

"These warm-blooded, deep-feeling stories astound with their empathy, fervor, and unstoppable power. The characters here are shaped by their conflicting selves as much as by the terra firma of Louisiana, which comes across like no other place. This book resounds long after reading."
—Ling Ma, PEN/Hemingway Award finalist for Severance

“This is a complex and engrossing portrait of humanity as it exists in a place that is deeply affected by the exploitation of resources and people.”
—Sarah Neilson, Shondaland

“A love letter to Louisiana, Last One Out Shut Out the Lights is a collection of eleven quirky, personal, provocative stories with characters that may remind you of someone you know… Soileau paints a picture not just of a place, but of a people; where have they been and where are they going in an ever-changing world."
—Ashley McLellan, My New Orleans

"These marvelous, deeply engaging stories are fierce and yearning, glowing with Stephanie Soileau's compassion and wit and intelligence. Her characters are unforgettable, and their ambitions and passions and hurts crackle beneath the blazing lights of the Louisiana oilfields. This collection is an astonishing achievement. I will read every word this writer writes."
—Kirstin Valdez Quade, National Book Award 5 Under 35 winner and author of Night at the Fiestas

"Stephanie Soileau is a natural-born storyteller, and Last One Out Shut Off the Lights is flooded with heartache and soul and humor and wisdom. As one of her narrators says, Brace yourself now. This is an outstanding and wide-ranging collection, plain and simple."—Peter Orner, National Book Critics Circle Award finalist and author of Maggie Brown & Others

"Stephanie Soileau is a brilliant writer---funny, fearless, generous, and wise---and Last One Out Shut Off the Lights is one of the most savage, heartbreaking, and powerful collections I've read in many years. I can't stop thinking about it. This book is a triumph."—Molly Antopol, author of the National Book Award longlisted The UnAmericans

"Soileau's vivid debut collection delves into snapshots of rough-hewn Louisianan lives... Filled with dense disquietude, these tales portray lives that are wrung dry by relentless conflicts and challenges. The characters are markedly distinct among the stories... Soileau shines a memorable light on a lesser-seen slice of Louisiana."
—Publishers Weekly