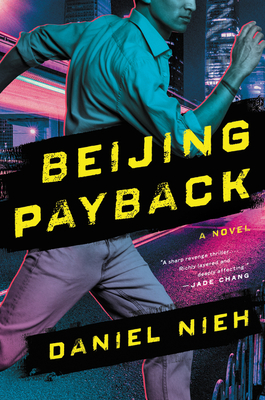 “Propulsive. . . . Highly enjoyable. . . . It sets up a sequel, one that I very much look forward to reading.” —The New York Times Book Review

A fresh, smart, and fast-paced revenge thriller about a college basketball player who discovers shocking truths about his family in the wake of his father’s murder

Victor Li is devastated by his father’s murder, and shocked by a confessional letter he finds among his father’s things. In it, his father admits that he was never just a restaurateur—in fact he was part of a vast international crime syndicate that formed during China’s leanest communist years.

Victor travels to Beijing, where he navigates his father’s secret criminal life, confronting decades-old grudges, violent spats, and a shocking new enterprise that the organization wants to undertake. Standing up against it is likely what got his father killed, but Victor remains undeterred. He enlists his growing network of allies and friends to finish what his father started, no matter the costs.

Daniel Nieh is a Chinese-English translator and professional model. He lives in Portland, Oregon.

“Propulsive. . . . Highly enjoyable. . . . In the lulls between high-octane fight scenes, Nieh uses the gaps in Victor’s fluency to lend realism to the experience of straddling these two worlds. . . . It sets up a sequel, one that I very much look forward to reading.”
— New York Times Book Review

“Nieh, himself the son of a Chinese immigrant, has great fun twisting the trope of the immigrant-parent-with-a-devastating-past in this page turner.”
— The Oregonian

“Nieh’s Victor is witty, passionate, competitive, honorable, and courageous enough to face some of the deadliest players in the Beijing underworld as he confronts his father’s past in this superb, sophisticated thriller.”
— BBC.com

“Daniel Nieh deftly recasts the immigrant novel as a sharp revenge thriller. The clash between past and present, between the homeland his father escaped and the new home he dreamt up for his family, is richly layered and deeply affecting.”
— Jade Chang, bestselling author of The Wangs vs. the World

“Like his driven, basketball playing, Chinese-American hero, Daniel Nieh has got skills.  Full of revenge, treachery, intrigue, and violence, Beijing Payback also tells a compellingly human tale about the ghosts and secrets that haunt the children of immigrants.  A strong and entertaining debut.”
— Sebastian Rotella, author of Rip Crew

“Beijing Payback kicks major ass. A fast moving, electric thriller that will remind you why you love the genre. I don’t know where Daniel Nieh has been hiding all of these years, but he arrives here fully formed, a writer already at the top of his game.”
— Tod Goldberg, New York Times bestselling author of Gangsterland

“Beijing Payback is the best China thriller I’ve ever seen—a propulsive nail-biter that roars with seamless confidence into a China most Western authors can barely penetrate. Fun, fascinating, insightful, and unforgettable.”
— Nicole Mones, author of The Last Chinese Chef and Lost in Translation

“[A] staccato-paced, character-driven thriller. . . . Readers will welcome the opportunity to follow good-guy Victor’s path of retribution and self-discovery.”
— Booklist

“Remarkable. . . . This impressive blend of crime and coming-of-age marks Nieh as a talent to watch.”
— Publishers Weekly (starred review)